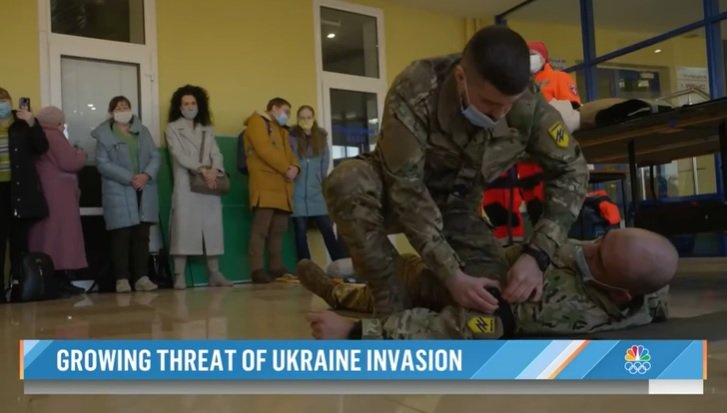 (Video of members of the Azov Battalion aired on NBC.)

Regardless of his motives, when Putin said he was going to focus on Nazis in Ukraine he likely knew of the Azov Battalion.

Not many Americans have heard of the Azov Battalion.  Apparently, NBC was unaware of this group on February 14th when it aired preparations being made for a Russian attack into Ukraine using the Azov Battalion as its example.  This was captured immediately by those in the know.

In a news broadcast Monday evening, NBC’s chief foreign policy correspondent Richard Engel told viewers how “some communities” in Ukraine are preparing for a war with Russia by “taking matters into their own hands.”

The report showed Ukrainian soldiers delivering “basic training for the whole family,” “first aid” and “weapons training” to a small group of Mariupol residents, including children and the elderly. One of them, 79-year-old Valentyna Konstantynovska, wielding an AK-47, was made the face of “Ukrainian resistance” by the world’s newspapers.

Engel left out of his account the fact that the military formation providing Konstantynovska’s training was the neo-Nazi Azov Battalion, clearly identifiable by its Wolfsangel insignia used by Hitler’s SS in the Second World War.

Below is NBC’s video of the Azov Battalion shared in the tweet.

Engel never identifies the paramilitary forces as members of the Azov Brigade. He does not care to share this information with the American audience. But the Azov Brigade insignia on their armbands – inspired by Himmler’s SS – establishes their identity. 2/ pic.twitter.com/NaQBTznjnH

We’ve reported on the Azov Battalion previously.  Members of this group were recognized at the US Embassy in Ukraine in 2014.  The group as we noted is violent, especially against groups like transvestites, gypsies, and immigrants.

When Putin claimed that he was going to get rid of the Nazi’s in the Ukraine in his announcement that he was invading Ukraine, NBC shared this:

In announcing he had launched Russian forces against key Ukrainian military and logistics posts, Putin said he’s striving for “the demilitarization and denazification of” the sovereign democracy in Kyiv.

Putin has long sought to falsely paint Ukraine as a Nazi hotbed, which is a particularly jarring accusation given that Ukrainian President Volodymyr Zelenskyy is Jewish and lost three family members in the Holocaust.

Claiming to fight the Nazis is “really code for replacing the Ukrainian government, which is especially ironic given that the Ukrainian president is Jewish,” said Andrij Dobriansky of the Ukrainian Congress Committee of America, an ethnic advocacy group based in New York City.

Michael McFaul, a former U.S. ambassador to Russia, fought to contain his anger over the Nazi narrative pushed by Putin.

“He’s talking about denazification. There are no Nazis in Ukraine,” McFaul said Thursday on MSNBC’s “Morning Joe.”

McFaul is not the most independent source that NBC could bring in to address this issue.  He was involved in the Russia collusion lie.

It is plausible that Putin was referring to the Azov Battalion when he mentioned the Nazis in Ukraine. 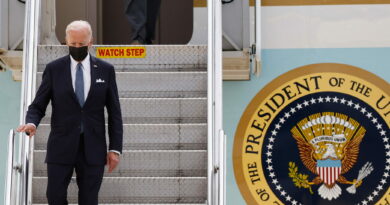 Opting for the Minimum Payment Changed My Life