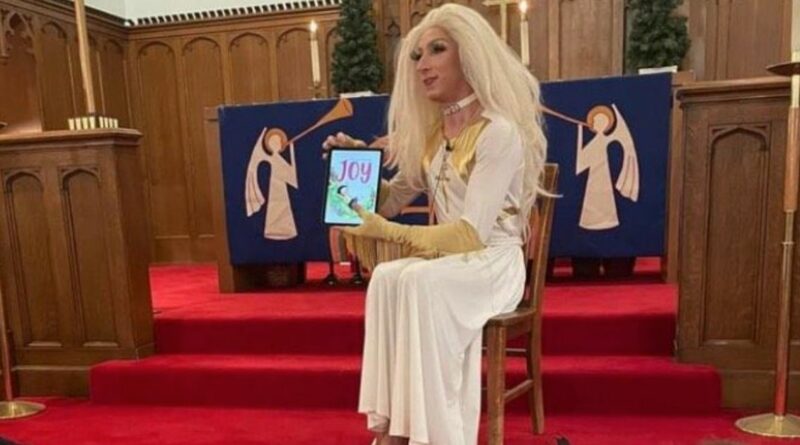 The phenomenon of men dressing up as women and reading to children has been spreading across the country.

According to a Facebook post from the church, the man in drag was seminarian Aaron Musser. They encouraged the congregation to “wear garments/accessories that make you feel 100%, like the best version of yourself!”

At the beginning of the message, Musser invited “any children or people who would like to see a picture book that I will be showing on the iPad.”

Once the children made their way to the front of the room, Musser asked them if anyone had ever seen a drag queen before. All of them said they had not.

“So this is everybody’s first time that they’re ever seeing a drag queen?” he said. “Well, hello! I am also a boy most of the time when I’m here, but today I am a beautiful queen.”

Musser then informed the children he would be reading a story entitled “Joy.”

Do you find this disturbing?

Musser went on to recap his sermon for the children and explain what John the Baptist meant when he talked about Jesus separating the grain and the chaff in the book of Matthew.

Throughout all this time, Musser was sitting in a sacred place of worship dressed as a woman.

Musser appeared to be modeling the behavior of activists from Drag Queen Story Hour, an organization that encourages drag queens to read to children in public places like schools and libraries.

“DQSH captures the imagination and play of the gender fluidity of childhood and gives kids glamorous, positive, and unabashedly queer role models,” the organization said on its website.

“In spaces like this, kids are able to see people who defy rigid gender restrictions and imagine a world where people can present as they wish, where dress up is real.”

St. Luke’s Lutheran Church of Logan Square says on website it is a member of the Evangelical Lutheran Church in America. Of the three denominations of Lutheranism, the ELCA is historically the most liberal.

According to the Mount Calvary Evangelical Lutheran Church, the ELCA holds that “Scripture is not necessarily always accurate on such matters as history and science.”

In June, the satire website The Babylon Bee published a story joking about churches embracing DQSH.

Mother charged with endangering a child after COVID-positive son found in trunk of car at testing site because she wanted to ‘prevent herself from getting exposed’: Court docs

We Contacted Every Single Senate Republican To Define ‘Woman.’ Here’s What They Said

Michigan man had sex with body of jogger he killed